We are a family run business established in 1980 offering the full range of piano services throughout Sussex, Surrey and parts of Kent and Hampshire.

Horsham Piano Centre was set up in 1980 and has been a family run business since then on the same site in Queen Street. Although the shop has just a single frontage it extends to a large showroom of around 2500 sq ft, enough to house a stock of up to 50 pianos. We offer a full range of piano services including sales, repairs, tuning, hire and removals. Also on the same site are our workshops where all the repairs and restoration work is carried out. 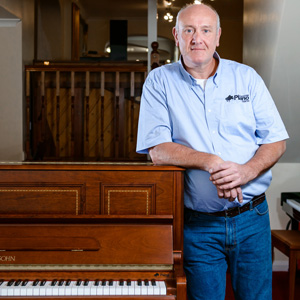 Andrew joined the business in 1982, shortly after it was established by his brother Paul. With more than 30 years experience in the piano trade there is little Andrew doesn’t know about pianos. He is involved in all aspects of the business but specialises in the repolishing of the pianos. With his eye for detail and expertise shabby looking caseworks are transformed into stunning cabinets that can often be mistaken for new pianos. Generally the instruments are in wood colours or black but he has also produces different colours including a pink grand for Paolo Gucci when he lived in Rusper. Andrew also does most of the soundboard restoration, and restringing of the pianos and he is a large part of the piano removal team. Andrew has a keen interest in restoring old Land Rovers in his workshop and has completed several over the last few years, taking each vehicle right back to the chassis and building up from there. 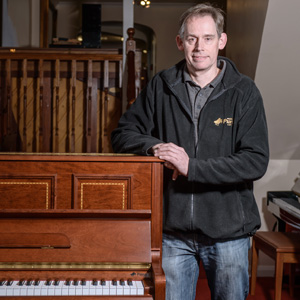 Shaun initially trained in engineering before spending 18 months travelling and then, on his return, joined the Horsham Piano Centre in 1991. Although starting on a part time basis he soon became full time and gradually got more involved in the running of the business until becoming a co-owner with Andrew by 1999. His grandfather Percy Durrant had a piano and general music shop in Horsham during the 1950’s & 1960’s, for those that might remember P. H. Durrant in Park Street and then North Street. Shaun’s uncle, the late John Durrant, was a popular tuner until his retirement a few years ago. Shaun received all his training at the Horsham Piano Centre and is now responsible for the action rebuilding work, regulation and tuning within the shop. Shaun enjoys spending time with family and friends and is often seen out walking his dog, or riding his bike in the beautiful countryside locally.